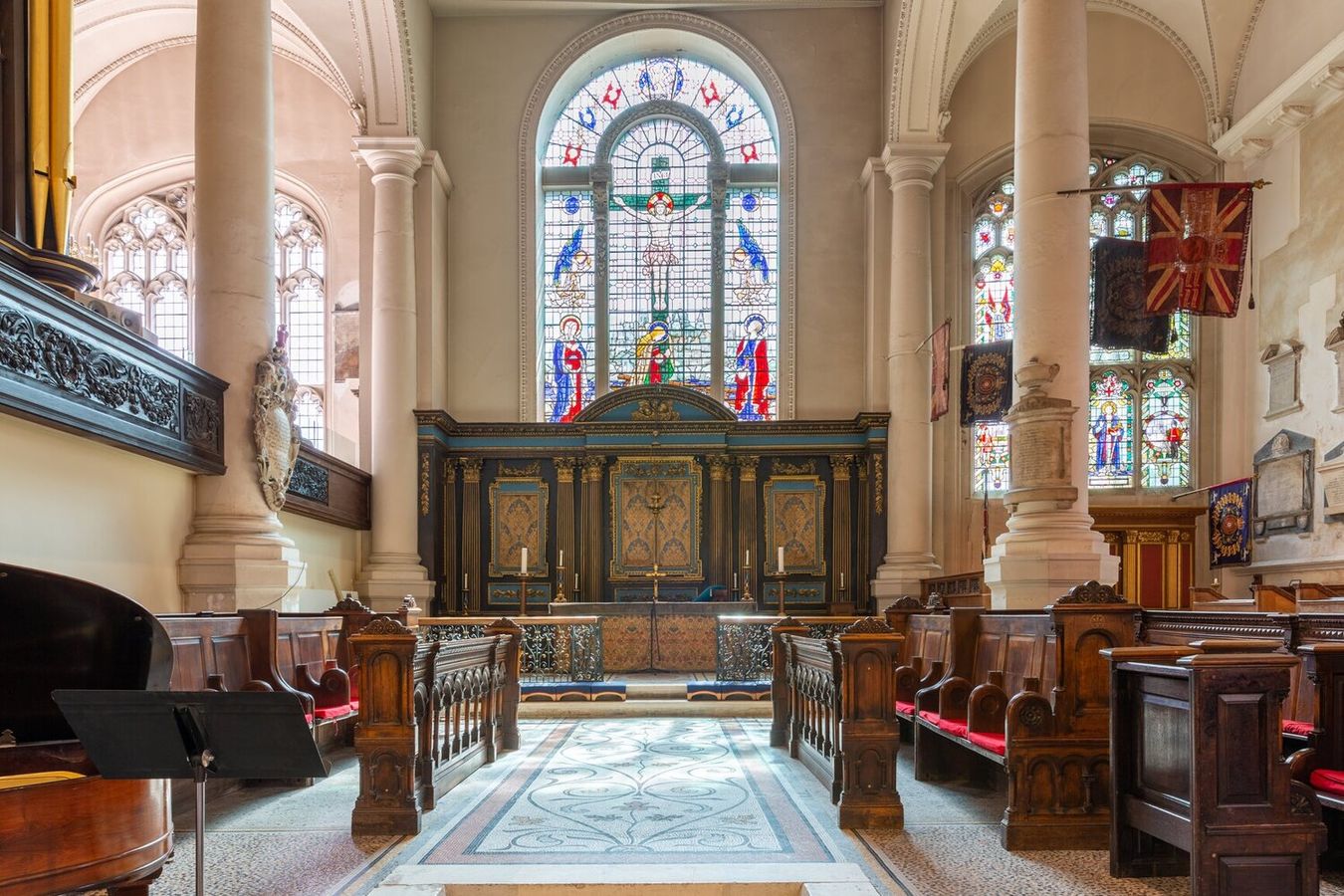 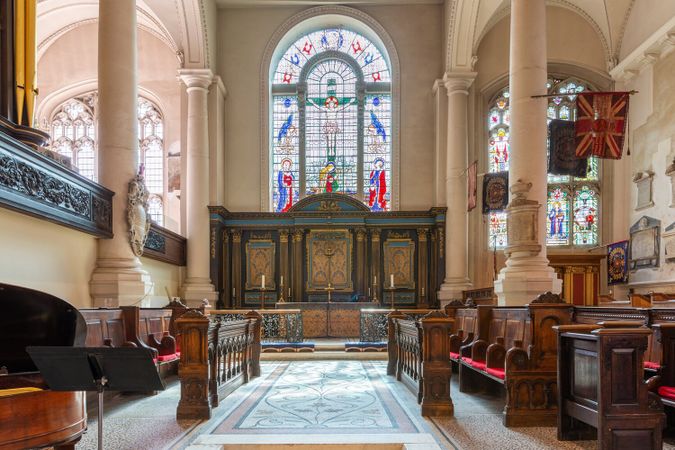 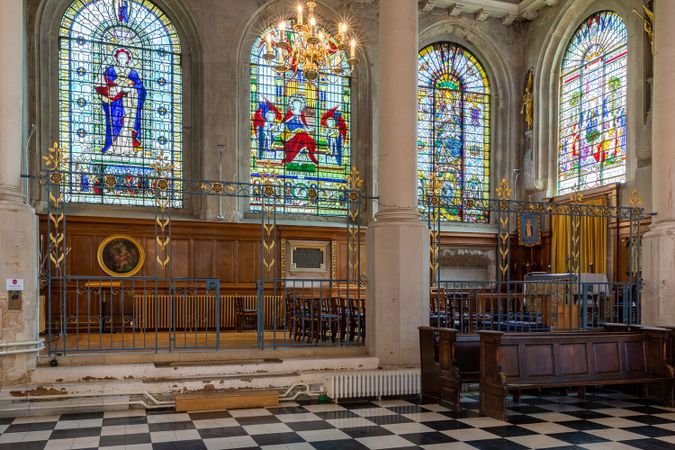 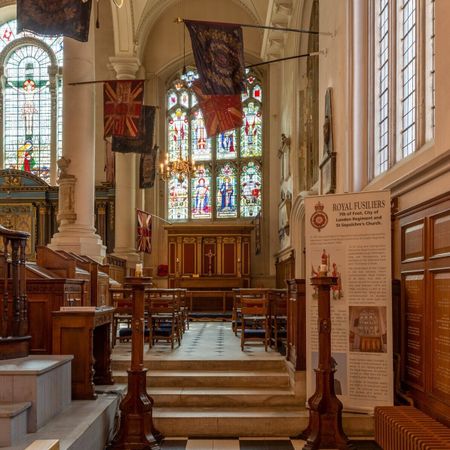 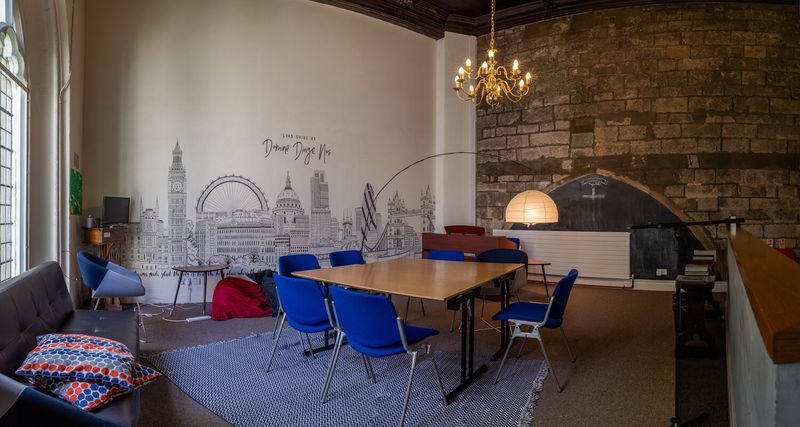 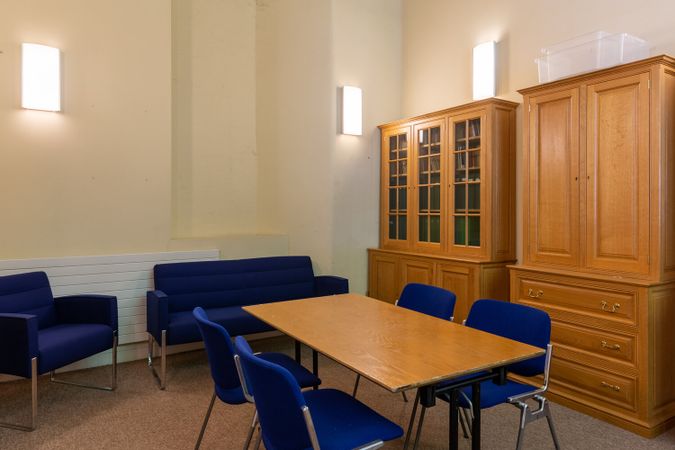 While there has been a church at the site of Holy Sepulchre for much longer, the current building dates from c.1450 when it was ‘newly re-edified or builded’ by Sir John Popham. The walls, porch and most of the tower all date from this rebuilding.

The interior is a polyglot of different styles and re-designs. The church was completely gutted in the Great Fire of London in 1666 and the interior had to be totally re-built.  The legend is that Sir Christopher Wren was supposed to do the work, but the Church Wardens at the time got bored of waiting and organised it themselves! Since then the interior has been substantially changed a number of times: in 1712; in 1737; in 1790 in 1834; in 1878; in 1932; and 1955.

The Musicians’ Memorial Chapel is on the north side of the church.  Until 1931 the organ occupied this space, and it was here that a young Sir Henry Wood (founder of the ‘Proms’) learnt to play the organ. Following his death his ashes were interred in the chapel, and funds raised to restore it.  The newly restored chapel was re-dedicated in 1955 as a Musicians’ Memorial Chapel.  The windows, kneelers, and other furnishings in the chapel have been gifted to the church in memory of particular musicians, and one of the centrepieces of the chapel is the Musicians’ Book of Remembrance.  The Book of Remembrance records the names, dates and specialisms of hundreds of musicians.  There is an active community of Friends of the Musicians Chapel who organise services and an on-line register of those whose names are recorded in the book.

As well as the chapels, there are a number of other notable features of the building. The organ originally dates from 1676. It was originally built by Renatus Harris as part of a fierce contest to build an organ for the nearby Temple Church. Harris lost the contest, but his loss was Holy Sepulchre’s gain and the organ was installed in the church. The original casing has been preserved across subsequent rebuildings and still bears the monogram C.R. commemorating Charles II. The last in a series of rebuilds was undertaken by Arthur Harrison in 1932 when the organ was moved to it’s current location. Sadly the organ is currently out of action while awaiting repair, although there is an exceptional temporary Makin organ in temporary use.

There are a number of notable stained glass windows in the church, perhaps surprisingly all dating from the 20th Century, their predecessors having been destroyed by fire or bombs.  The East Window (1949) depicts “the Living, Victorious Christ on the Cross” above a background of the Heavenly City represented by some of the churches of London past and present.  At the foot of the cross are Mary Magdalen, the Virgin Mary and St. John, and the arch of the window depicts the emblems of Jesus’ passion (dice, a scourge, lance, robe and hammer and nails), cherubs and a Pelican (an ancient emblem of Jesus).  There are also windows representing the Resurrection (in the South wall), the Royal Fusiliers (in the Fusiliers’ Chapel), and St. Stephen Harding (in the Musicians’ Chapel).  There are also a number of memorial windows.  There are four in the Musicians Chapel commemorating Sir Henry Wood, Dame Nellie Melba, John Ireland, and Walter Carroll. There are two in the south wall commemorating Archibald Nicholson (a leading glass painter and congregation member, who painted the Stephen Harding window), and Captain John Smith (one of the founders of Virginia, see below).

There are a series of excellent carvings from the late 17th and early 18th Centuries within the church, including the counter-weighted font-cover in the south-west corner of the nave, the twin pulpits (one of which was possibly used by John Wesley when preaching here on Christmas Day in 1778), the reredos on the east wall and the organ casing.