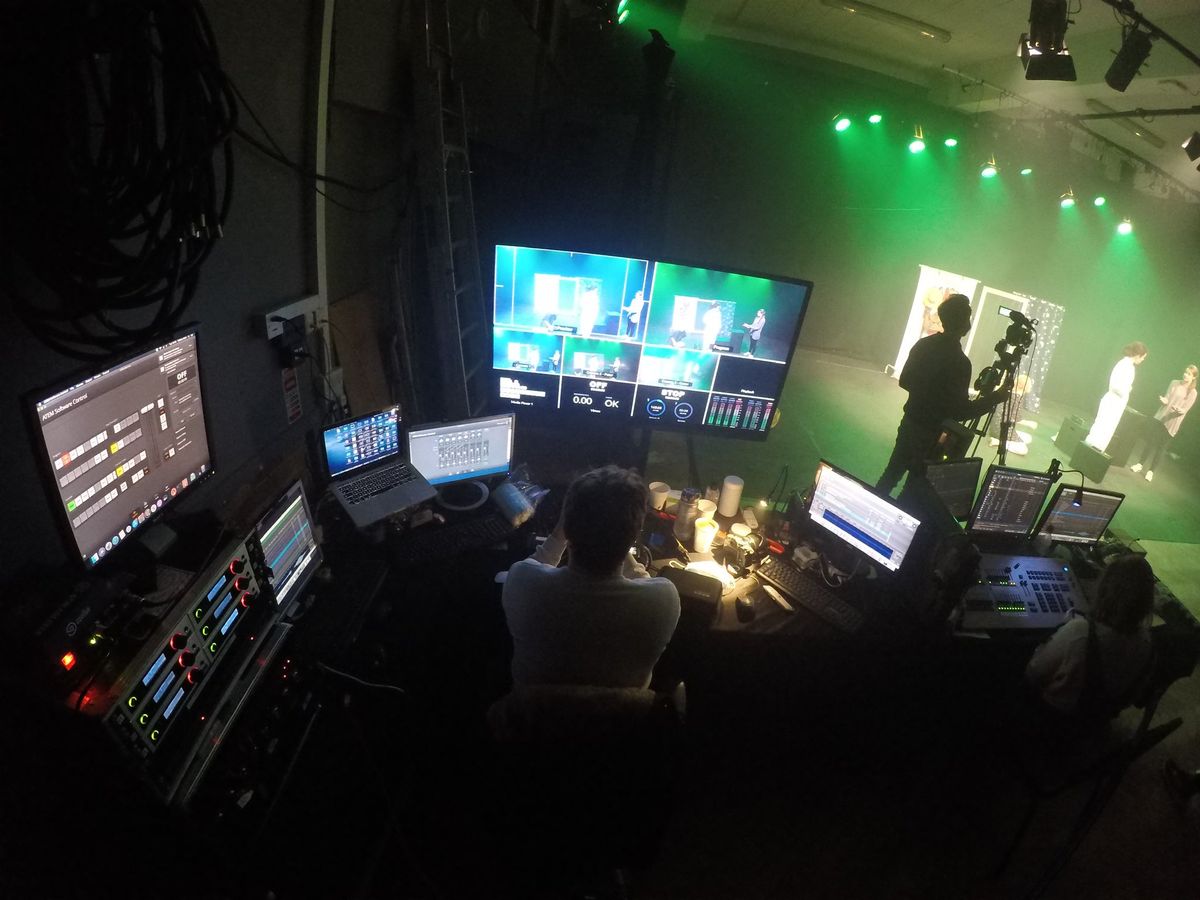 Since lockdown first closed venues across the country, the theatre industry has been in overdrive searching for ways to keep the culture and jobs alive. Ever resourceful, many in the industry looked for online alternatives and utilised free or affordable platforms, such as Zoom and Facebook Live, to live stream adapted shows with varied and often frustrating results. While bigger names in the industry, such as the National Theatre, used the opportunity to launch “NT at Home”: a on-demand streaming service offering recordings of past performances.

Unbeknown to most, high-quality live streaming is actually available to many in industry, from small theatres to independent companies. Steady development in broadcasting technology has made the investment in equipment more attainable for venues and in turn, made it a more financially viable option for independent productions.

We spoke to Will Alder, a freelance theatre producer who is currently working with Applecart Arts to oversee their new live streaming studio and online platform. He took a few minutes to answer some of our questions on what makes live streaming special, what works and doesn’t work when live streaming and what things you need to consider if you want to live stream your production.

“We want to embrace the live, raw and often unexpected things that happen on stage, and bring them to audiences at home through the use of the brilliant technology we have on hand, rather than allowing the technology to dominate the storytelling.”

Hey Will, could you introduce yourself, tell us a bit about your background in theatre and how you came to work at Applecart Arts?

Hello! Yes, of course. I’m a Theatre Producer, Lighting and Sound Designer and more recently Live Stream Producer. Over the last thirteen years I’ve worked in a host of different venues across the UK, Europe and beyond. From very small shows taking a handful of audience members through disused air raid shelters to large touring venues and the West End. Currently, I’m a freelancer - working with Applecart on a very regular basis. My journey with them started in April 2019.

How long has Applecart Arts been live streaming?

When the UK was sent into lockdown in March 2020, we quickly agreed that we wanted to find ways to best serve both our local community and wider theatre-going audiences, and to give voice to the stories that needed to be told during this strange time. We already had a stock of documentary and filmmaking cameras, and with the addition of a vision mixer (and a huge amount of manual work), we were quickly able to start streaming. Our first live stream went out in mid July 2020, and was watched by nearly 6,000 audience members across the UK and internationally.

What do you think is special about live streaming? Why did Applecart invest so much into it?

I think what makes it so important for us is that we can take the brilliant theatre happening at our venue, and bring it to audiences that would otherwise have never been able to see it in this time. The shows we put on are specifically live streamed theatre, rather than pre-recorded films with editing. We want to embrace the live, raw and often unexpected things that happen on stage, and bring them to audiences at home through the use of the brilliant technology we have on hand, rather than allowing the technology to dominate the storytelling.

The story is something we’ve been very keen to keep front and centre when producing live streams. It’s very easy to get bogged down with the technology when you’re using it all the time to tell these stories, but at the very core of this whole experience must be the consideration for how that technology is being used to tell that story; how the angles we choose, and the lighting and sound we use impacts the audience’s perception of that story.

Other than Covid, what has changed in the last few years that makes live streaming a more accessible option for theatre makers?

Definitely the technology. The last time I was working in film and TV was 2008,  and it was all with terrible cameras filming onto MiniDV tapes, where you had to play them into the computer and capture it and then hope your computer didn’t have a total meltdown as you turned your attention to editing. Now the kit is more intuitive and user-friendly, and is getting more affordable. To have a set up that we have now at Applecart in the early 2000s, it would have cost hundreds of thousands of pounds, whereas now we have actually only had to invest in some key pieces of equipment - like our vision mixer. 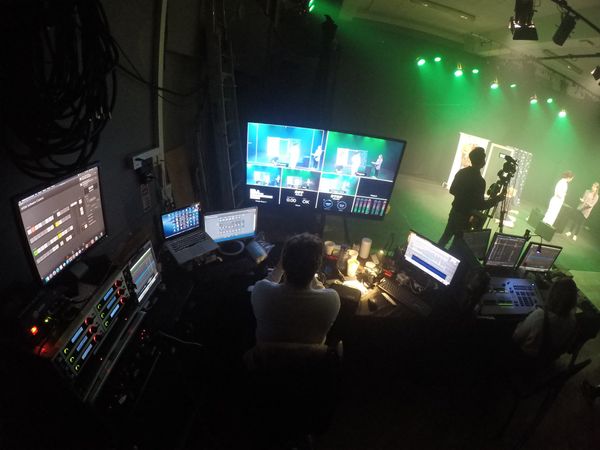 Talk us through your live stream set-up at Applecart.

We have seven broadcast quality cameras and a BlackMagic vision mixer. In essence, this is enough to live stream once you have the relevant subscriptions to hosting services and a decent enough internet connection.

We run a dedicated fibre internet line for all live streams that runs separately to the internet connection for the rest of the building, and this keeps our streaming speeds tip top. It also means that on the odd occasion an audience member gets in touch about connection issues, we can feel assured that it’s an unfortunate case of their own internet not quite being up to speed, rather than ours.

Quality of sound is often a key issue with live streaming, so we have put a lot of work into ensuring the sound is the best we can make it. We have a rack of radio mics, which include 6 lapel mics and 4 handheld mics to capture the sound in the space. We also have a wide selection of cabled mics, and the ability to expand all of this if a production requires.

Following some generous donations of technical equipment, we have built up an impressive and diverse stock of theatrical lanterns, and have selection of industry standard lighting desks.

Aside from this, our setup varies from show to show. We’ve recently taken our entire control area from the theatre space itself to another part of the building, which helps us to have a much better understanding of what the audience are seeing and hearing at home.

We’ve recently invested in a camera crane (jib), which will enable us to get some really exciting shots with extra movement and height. We also have just built some dollies for the cameras to sit on so they can be wheeled into position for particular shots. We have dedicated playback computers running Qlab for audio and video.

“Sometimes we’ll come across a show that starts to look a bit odd on-screen, and it’s usually because there’s been some overthinking about how to adapt what’s going on for the audience.”

It gives us complete control over our income, which is so important both to us as a fringe venue, and to the companies we work with, especially as a lot of the artists and performers we’re working with at the moment have seen such a significant cut in income over the past year.

We discovered early on in the process that charging for tickets helped to bring in audiences, as it encouraged our audience to invest in supporting a show, and make sure that when the time came they tuned in, rather than putting on Netflix!

Do you think any types of show simply don’t work over livestream?

I don’t think so, as long as companies continue to think of it not as a lesser alternative or something prohibitive, and instead embrace it as a new opportunity to think outside the box. We’ve had a number of shows involving audience interaction with characters and items on stage, and in every case we’ve found creative solutions for this to happen without the audience feeling like they have missed out. 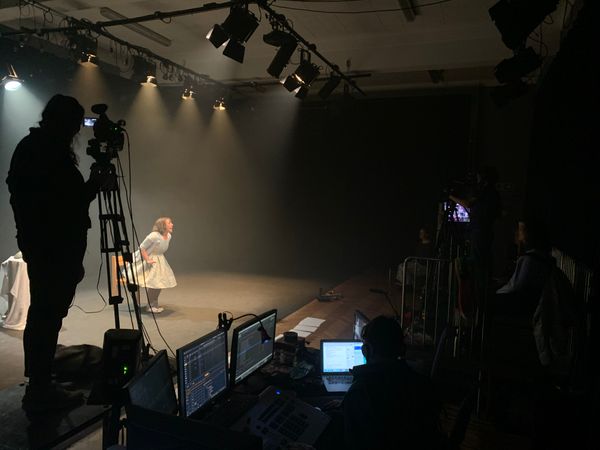 Do productions normally need to adapt their show for live streaming?

Often productions do need a practical tweak or two, though some shows work very well the second you put them in front of the camera. Sometimes we’ll come across a show that starts to look a bit odd on-screen, and it’s usually because there’s been some overthinking about how to adapt what’s going on for the audience. If you start to think of a theatre piece as if it’s a film, in this medium it can start to look awkward and mismatched, so we try to focus on the narrative and storytelling aspects.

“We’re a friendly, open and community-driven venue who want to see great live art at its best.”

As the producer of the show, do I need to consider anything extra when live streaming? Such as digital rights for performance, third party work or music?

Yes, this is very important. There’s an algorithm that scans all live streamed material on any of the usual platforms (Facebook and Youtube famously have very strict algorithms). The algorithm picks up metadata from any versions of music that include copyright material from a well known record label, and if it detects that metadata it will shut down the live stream - whether you have permission to use that material or not. So best practice is to incorporate either royalty free or original music into the show, or to ensure the music rights are negotiated far in advance of the broadcast.

If a show were to live stream at Applecart, who owns the recording rights of the show?

The recordings rights primarily lie with the company - we want to support companies and ensure that their work continues to flourish after they leave our venue, and this is a key way for us to support that by ensuring we have no claim over the recordings after the show leaves us.

There are only two exceptions to this: those that we have supported by way of rehearsal space and development time or some form of support in kind where we encourage an ongoing relationship between Applecart and that piece, or those companies that put work onto our On Demand service - where we ask to have exclusivity of that recording of that show on online platforms.

Is there anything else you wanted to add?

Yes! Come chat to us! We’re a friendly, open and community-driven venue who want to see great live art at its best. Whilst we have turned our attention to our live streaming at the moment, we can’t wait for the time when live streaming is just one string to our bow. We have a brilliant team of dedicated people who want to see each and every show do well, and our theatre is one of the best equipped spaces for grassroots theatre in the country.

If you’re keen to find out more about us, catch one of our On Demand shows which are only £5 to access. If you’re looking to live stream a performance, or have any questions about our set up or our programme, drop us an email - info@applecartarts.com.

This blog post was written by James from Tutti. Tutti is the Airbnb for creative spaces: we specialise in matching up affordable, Covid secure spaces with London’s creative community.

It’s free to sign-up and you can book a live streaming session with Applecart Arts on Tutti today. Let’s get the show on the road! 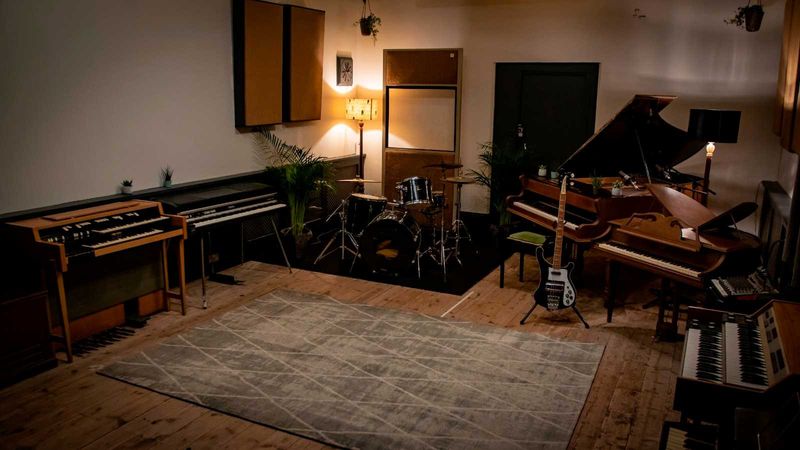 Jan 24, 2022
How to Make Your Listing Picture Perfect (in 4 easy steps)
Having a good set of photos to show-off your space is crucial, especially as that’s the main focus potential bookers will see when searching for spaces. But have you ever thought about how to make your photos work for you?

James H
How To Host

Partner with Tutti to save time on creative hires

Do you host shoots, rehearsals, recordings, or other creative events regularly?

Partner with Tutti and we'll market your amazing space to thousands of professional creators in your area.

Create an account for free
Learn more about Tutti 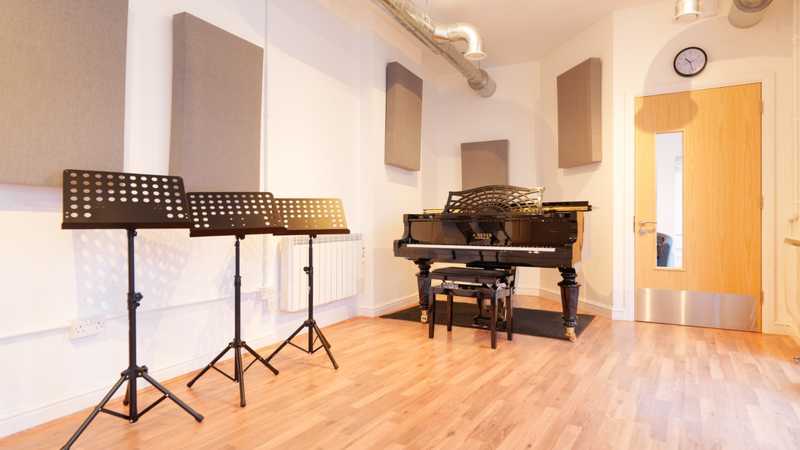 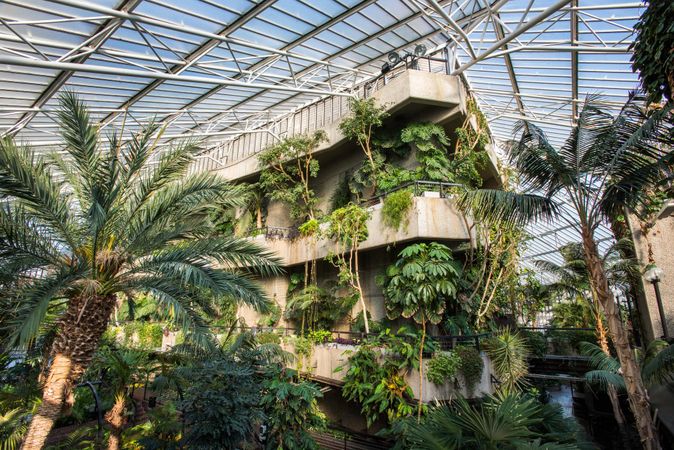 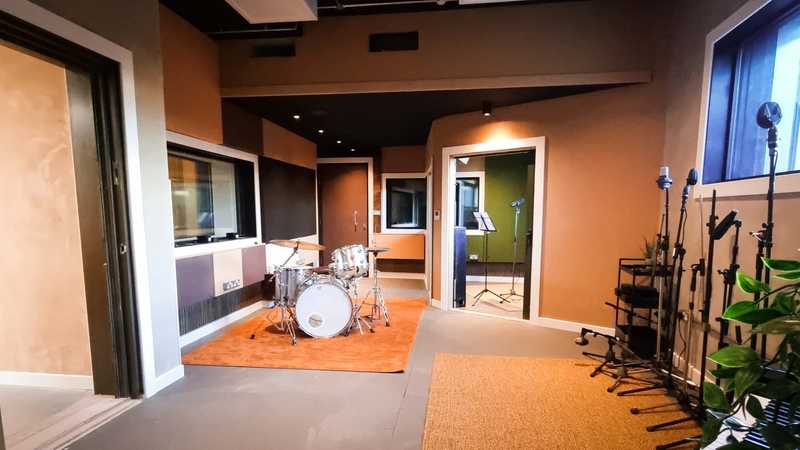 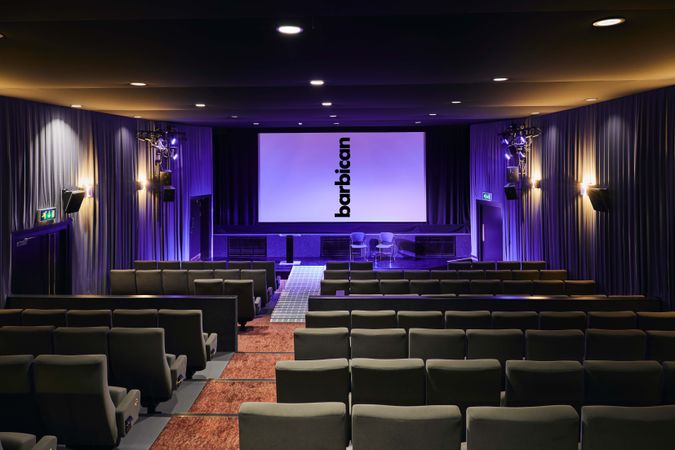 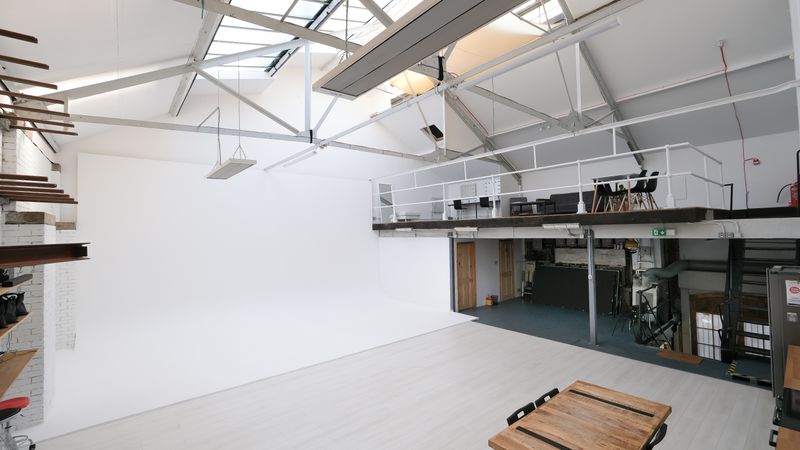 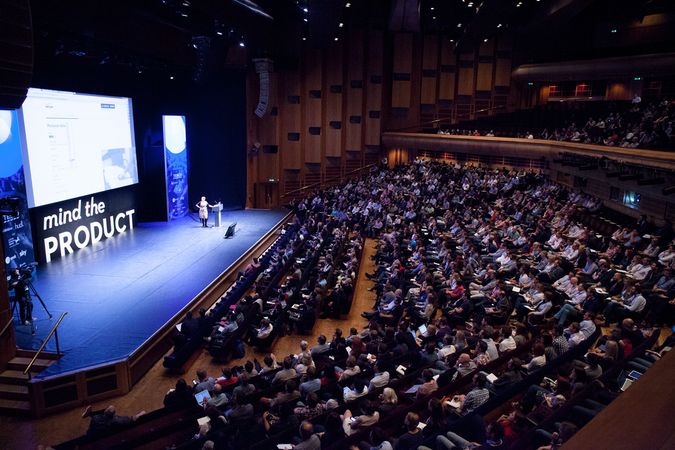